I picked this album up many years ago in one of those independent record stores that used to dot the strip malls of America. They were dangerous places and fun too. Hours would pass like minutes as I explored rack upon rack of tapes and CDs, while racking up an ever bigger dent in my credit rating.

Thankfully, the independent record store is making a comeback, at least in my hometown of Melbourne. Every week a book store expands its stock to include boxes of old vinyl or a new vinyl shop opens it doors offering to the world once more that deep richness of the 33 1/3 rpm disc.

The name, Lonnie Johnson, had been a small whisper in my mind at the time I made this purchase. And looking back, I wonder, why? I was pretty into the blues by that point but was focused primarily on the Chicago electric scene. I knew nothing of the pioneers of the genre and the discovery of that sophisticated East Coast sound of the 20s and 30s was many years in the future. Perhaps there is some sort of sub-conscious ‘knowing’ that inhabits the ether and which operates, unbeknownst to us, compelling the purchase of music which normally would go unnoticed. I don’t know.

This record, though, has been an absolute winner for me since that Fate Full day two decades ago. It is a solo record; just Lonnie, his voice and tremendously accomplished and deceptively simple guitar playing. There is an inherent melody in this collection, something that goes beyond the individual songs. Lonnie’s voice has a timeless quality. I hate words like ‘timeless’, normally. They mean everything and nothing. But in this case it is appropriate. I have never been able to peg whether this is an old man’s voice or that of a young singer. It just is; doesn’t betray age. And it commands our attention because of its sweet deep tunefulness. Johnson is able to use his physical instrument with such delicacy too. Listen to each of these tracks with care but especially the final ballad, You Won’t Let Me Go and try to think of a more sensitive interpretation.

I’m not a guitar player so will defer to those who understand the nuances of the art. B.B. King claims Johnson as his most significant influence, which for me pretty much sums up the case. The guitar picking on this album reminds me of the writing of the Indian novelist, R.K. Narayan, who has built an international reputation on writing wonderfully humane stories in the most basic prose. But try to do the same and you’ll see how difficult that ‘simplicity’ is to replicate.

Lonnie Johnson’s guitar playing is like this. Each note sharp and distinct, so easy to identify. Yet in their relationship with other notes there is born a complex emotional feeling. A feeling of warmth and the particularly human pleasure that arises from when the dart hits the bullseye smack in the middle.

The songs here cover a few standards (Summertime, What a Difference a Day Makes) as well as originals. Evil Woman is one of my personal favorites: my woman is so evil/she sleeps sideways in the bed ! 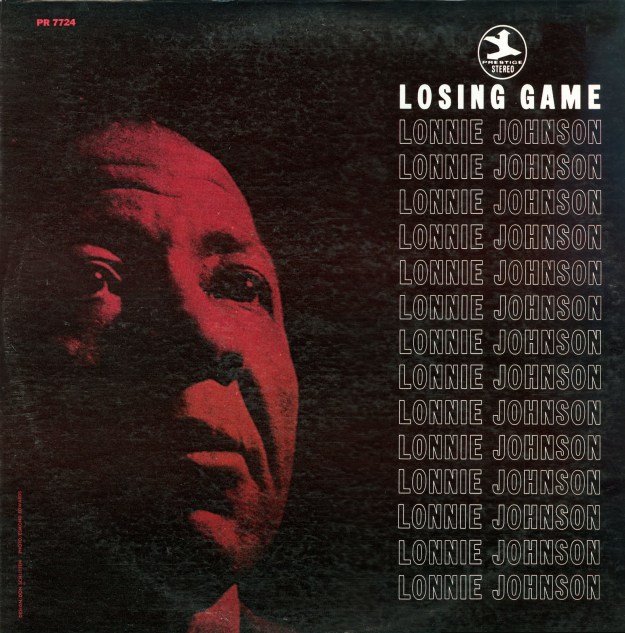 04 What a Difference a Day Makes

11 Four Walls and Me

Third instalment of American blues focuses on a few guitar whizzes.  Guys who not only knew how to play the six string orchestra but who have influenced legions of blues axemen, big stars as well as bar room dreamers, since.

Blues guitar simply would not have developed in the manner that it did if not for the prolific brilliance of Lonnie Johnson. He was there to help define the instrument’s future within the genre and the genre’s future itself at the very beginning, his melodic conception so far advanced from most of his prewar peers as to inhabit a plane all his own. For more than 40 years, Johnson played blues, jazz, and ballads his way; he was a true blues originator whose influence hung heavy on a host of subsequent blues immortals.

Johnson‘s extreme versatility doubtless stemmed in great part from growing up in the musically diverse Crescent City. Violin caught his ear initially, but he eventually made the guitar his passion, developing a style so fluid and inexorably melodic that instrumental backing seemed superfluous. He signed up with OKeh Records in 1925 and commenced to recording at an astonishing pace — between 1925 and 1932, he cut an estimated 130 waxings. The red-hot duets he recorded with white jazz guitarist Eddie Lang (masquerading as Blind Willie Dunn) in 1928-1929 were utterly groundbreaking in their ceaseless invention. Johnson also recorded pioneering jazz efforts in 1927 with no less than Louis Armstrong’s Hot Five and Duke Ellington‘s orchestra. (READ MORE)

Blind Blake is a figure of enormous importance in American music. Not only was he one of the greatest blues guitarists of all-time, Blake seems to have been the primary developer of “finger-style” ragtime on the guitar, the six-string equivalent to playing ragtime on the piano. Blake mastered this form so completely that few, if any, guitarists who have learned to play in this style since Blake have been able to match his quite singular achievements in this realm. Blind Blake was the most frequently recorded blues guitarist in the Paramount Records’ race catalog; indeed, Paramount waxed him as often as they could, as he was their best-selling artist. By the time the Paramount label folded in the fall of 1932, Blake had recorded an amazing 79 known sides for them under his own name and had contributed accompaniments to Paramount recordings by other artists such as Gus Cannon, Papa Charlie Jackson, Irene Scruggs, Ma Rainey and Ida Cox to name only a few. (READ MORE)

Scrapper Blackwell was one of the most important guitar players of the ’20s and early ’30s, with a clean, dazzlingly articulate style that anticipated the kind of prominent solo work that would emerge in Chicago as electric blues in the ’40s and ’50s, in the persons of Robert Nighthawk and the young Muddy Waters. His “string-snapping” solos transcend musical genres and defy the limitations of his period. Although Blackwell‘s recordings were done entirely on acoustic guitar, the playing on virtually every extant track is — and this is no joke — electrifying in its clarity and intensity. Along with Tampa Red (who also had some respect in jazz circles, and who was a more derivative figure, especially as a singer), Blackwell was one of a handful of pre-war blues guitarists whose work should be known by every kid who thinks it all started with Chuck Berry or even Muddy Waters. In addition to the albums credited to Scrapper Blackwell, his recordings can also be found on collections of Leroy Carr‘s work (virtually all of which feature Blackwell) including such releases as Magpie Records’ The Piano Blues: Leroy Carr 1930-35; and one Carr/Blackwell duet, “Papa’s on the Housetop,” which is not on The Virtuoso Guitar of Scrapper Blackwell, but shows up on Yazoo’s Uptown Blues: Guitar Piano Duets anthology. (READ MORE)

Universally hailed as the reigning king of the blues, the legendary B.B. King is without a doubt the single most important electric guitarist of the last half century. His bent notes and staccato picking style have influenced legions of contemporary bluesmen, while his gritty and confident voice — capable of wringing every nuance from any lyric — provides a worthy match for his passionate playing. Between 1951 and 1985, King notched an impressive 74 entries on Billboard’s R&B charts, and he was one of the few full-fledged blues artists to score a major pop hit when his 1970 smash “The Thrill Is Gone” crossed over to mainstream success (engendering memorable appearances on The Ed Sullivan Show and American Bandstand). Since that time, he has partnered with such musicians as Eric Clapton and U2 while managing his own acclaimed solo career, all the while maintaining his immediately recognizable style on the electric guitar. (READ MORE)

Washerman's Dog's original blog had 581,842 page visits! Keep coming back, and leave a comment too!

Tales from the mouth of a wolf

Seeker of the way, fair of heart and mind, sojourning with a will, the living truth to find.

the point where music and art meets

A Journey to Inner Peace

Listen to your inner self..it has all the answers..

What am I doing here?

whatever appears that seems worth sharing

My wee little life in this great big world and related sundries.

It's never too late

the voices buzzing in my head

Life Through a Lens - Photography blog by Haris Coussidis

Taking back Lollywood - One blog at a time

A Blog about Music and Popular Culture

A near death experience told me to write ... I never stopped

The best in new and forgotten music and film